By Nancy Melanson
Published on November 26, 2021

When baking, you will often run into situations where you don’t have an ingredient on hand, not enough of an ingredient, or need to substitute out an ingredient for dietary reasons.

Many recipes will provide solutions, but if your recipe has not provided an alternative to an ingredient you wish to substitute, the list below should help find a solution to your baking dilemma. 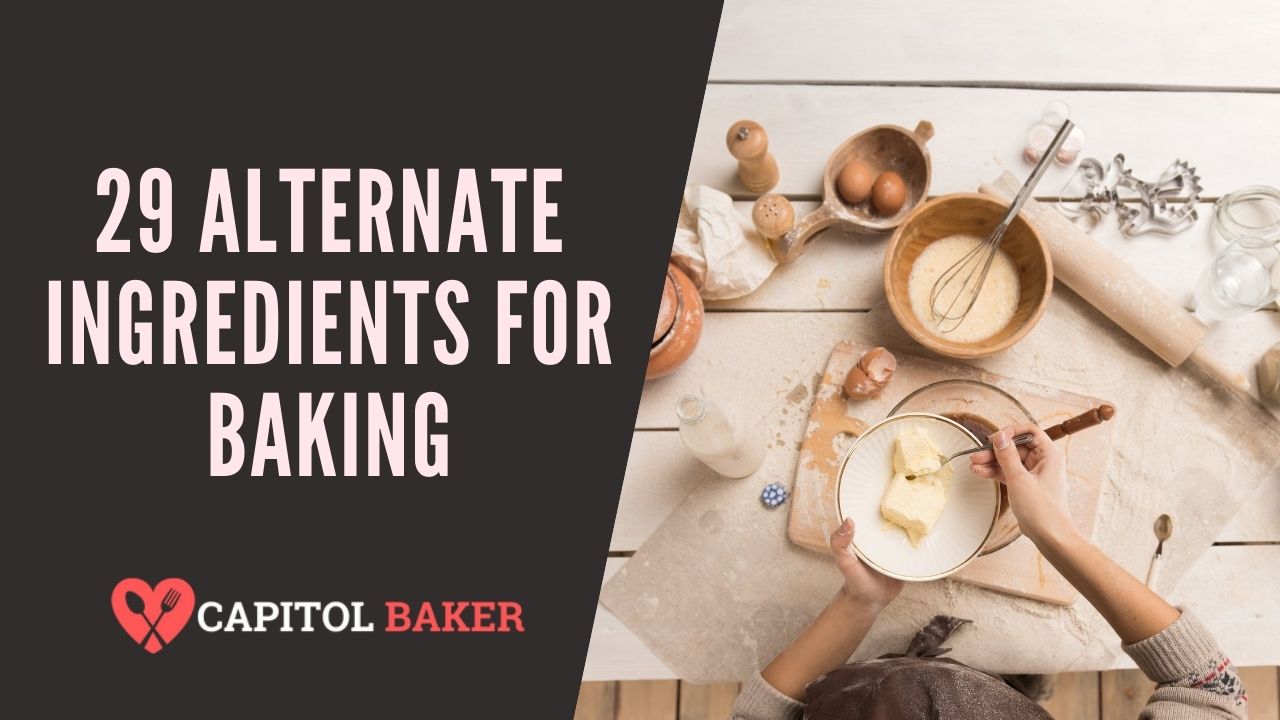 1. Can you use pancake mix as a substitute for flour?

In some recipes, this might be possible, but you will need to read the ingredients of your pancake mix to see if any leavening agents have been added, such as baking powder. If this is the case, simply reduce the leavening in the recipe.

Coconut oil can replace lard in many recipes. Use refined coconut oil to avoid the sweet and strong coconut flavor, especially if your recipe is for a savory dish. Another alternative is to use vegetarian shortening, such as Crisco.

3. Why does applesauce work as a substitute for eggs?

While applesauce won’t exactly replace the nutrients found in eggs, it can be used in place of eggs in some baking recipes where eggs are not the main leavening agent. (For example, this would not work in an angel food cake.)

Eggs are a source of moisture for recipes, applesauce may be used to replace them as it has a similar thick texture and moisture content. Use ¼ cup applesauce for each egg you replace. You may need to reduce other liquids in the recipe.

Microwave for 10 seconds at a time in a microwave-safe bowl until they begin to melt, and stir to combine until smooth. Adjust the quantity to fit the amount of marshmallow cream needed.

5. What cheese will substitute for gruyere?

Gruyere is a light yellow cheese with a slightly nutty flavor that hails from Switzerland. It has a rich and creamy texture.

Jarlsburg is a Norwegian cheese with a soft creamy texture and similar but slightly stronger flavors than gruyere.

Gouda can be used in a pinch, but keep in mind that gouda is much sweeter and milder than gruyere, so it won’t always be a good substitute. Look for a cheese that has a slightly creamy texture and a  bit of tanginess to make a good gruyere substitute.

6. How much oil to substitute for butter?

When baking, you may use a 1:1 substitute ratio for oil and butter, with the exception of cookies. Because butter and sugar are typically creamed together in cookies, the butter is softened but not melted, and there is less liquid in cookie recipes, this creates a dough rather than a batter. Use ½ the amount of oil to butter in cookie recipes.

7. Why is applesauce a substitute for oil?

Applesauce has a similar consistency and liquid content as oil, but will definitely change the resulting texture of your baked goods since there will be reduced fat content.

It is suggested to start with swapping half the oil that a recipe calls for with applesauce, and seeing how the recipe turns out – you can make adjustments to your liking.

8. What is a substitute for arepa flour?

Arepas typically use masarepa, a refined and pre-cooked corn flour. This differs from other corn flours because it is starchier and absorbs liquids better, resulting in a clay-like dough and a specific texture when baked.

You can use masa harina or regular cornmeal, but keep in mind that the texture will be much drier and the arepas may be crumblier.

9. What are the substitutes for baking powder?

10. What are the substitutes for cream?

For a vegan option, full-fat coconut milk may be used, but be aware your baked goods will take on some coconut flavor.

You can also use milk and butter to replace cream – stir ¼ cup melted butter into ¾ cup milk to replace a cup of cream.

Greek yogurt can be used if the added tanginess won’t affect your recipe, simply thin out the yogurt with milk until the texture matches that of cream.

11. Will allspice substitute for nutmeg?

Allspice looks like a large peppercorn and tastes rather like a blend of cinnamon, nutmeg, and cloves, making it an excellent choice to substitute in place of nutmeg. Use an equal amount of allspice as your recipe called for nutmeg.

12. Will sour cream substitute for buttermilk?

Sour cream closely matches the taste and tang of buttermilk, making it an excellent substitute. Dilute with water or milk until it reaches the consistency of buttermilk, using a whisk to blend.

13. Will half and half substitute for heavy cream?

14. Which sugar substitute is best for keto diets?

Monk fruit is a natural sweetener, although you may need to reduce the amount of sugar in your recipe, as monk fruit is quite a bit sweeter than regular granulated sugar.

Stevia is another popular natural sweetener, made from leaves of the stevia plant. This sugar is also extremely sweet, so adjust your recipe to taste.

15. Which is the best sugar substitute for diabetics?

Diabetics need to limit sugar consumption to maintain a healthy and safe diet. Replacing sugar with artificial or natural replacements will help achieve the correct levels of insulin.

Natural sugars such as monk fruit and stevia are both very popular substitutes for diabetics and can be bought in blends that can be substituted 1:1 in baked goods.

16. When baking, what is a substitute for sour cream?

If you are out of sour cream, you can mix a tablespoon of lemon juice with either heavy cream or yogurt. Greek yogurt can help add to the tartness of your substitution.

17. When baking, what is a substitute for butter?

Margarine can be used in place of butter in most recipes, and vegan butter comes in both soft and stick varieties.

Oil may also be used in place of melted butter in batter-type recipes in an equal amount, or use half the amount of oil to butter in cookie recipes. Coconut oil can be used to replace butter as well, in equal amounts to the butter.

18. When baking, what is a substitute for shortening?

Coconut oil can be used as a 1:1 substitute for shortening; use refined coconut oil to avoid any coconut flavor. Butter or margarine may also be swapped out in equal amounts and may lend a richer flavor to recipes.

19. What to substitute for cornstarch?

20. Is almond flour a substitute for flour?

Almond flour can replace flour in some instances, but it is not a 1:1 substitute in place of all-purpose wheat flour.

Almond flour lacks gluten, which is the substance that develops in flour to help hold baked goods together.

When using almond flour, you will typically need to add a starch (such as potato starch or tapioca starch) as well as a gum (xanthan gum is typically found in gluten-free flour blends) to help the flour hold together in a recipe.

21. What is a substitute for molasses?

If the flavor of molasses won’t be missed, you can substitute molasses with honey or dark corn syrup.

Maple syrup can also be used, but it does have a higher water content than molasses so you may need to adjust other liquids in the recipe. If the molasses flavor is vital to the recipe, use ¾ cup brown sugar in place of 1 cup of molasses.

22. How much milk to substitute for evaporated milk?

23. How many eggs substitute for cottage cheese?

Scrambled egg whites can be used as a reasonable substitute for cottage cheese, as they have a similar texture.

Scramble the egg whites in a nonstick pan and use in a 1:1 ratio to the amount of cottage cheese required.

24. How many bananas substitute for eggs?

Bananas can be used in place of eggs when you don’t mind the added banana flavor. Use ½ banana per egg that you will be replacing, and mash them in a bowl using a fork or potato masher. Measure out ¼ cup banana per egg; you may have some mashed banana leftover.

25. Can you use almond milk as a substitute for milk?

In most baking recipes, almond milk makes a wonderful substitute for milk. It will alter the fat content of the recipe, so you may need to add a bit of oil to keep the texture of the baked goods the same.

In recipes where creaminess is a factor, oat milk may be a better substitute. Use either almond or oat milk in equal amounts.

26. Can you use jello as a substitute for gelatin?

27. What can you use as a substitute for vanilla extract?

Use the same amount of spiced rum, bourbon, or brandy as a substitute for vanilla extract. If desired, almond extract can be used in place of vanilla, although the flavor will be altered.

If you would like to alter the flavor of your recipe, use fruit zest such as orange or lime in place of vanilla extract.

28. What is a good substitute for bread?

Cloud bread is a keto alternative, using egg whites and cream cheese to make a fluffy bread that resembles clouds.

When making piecrust, lard may be easily replaced with butter, kept cold and cut into pieces, and then worked into the flour. You can also use coconut oil, making sure to use refined coconut oil if you do not wish to have coconut flavor in the piecrust.