Can You Freeze Chicken Salad? Yes, Here’s How

No dinner party is complete with a delicious chicken salad! The exquisite celery, chopped onions, a sprinkle of lemon juice with the star of the dish, chicken makes any event complete. But it’s hard to gauge just how much salad is needed for a party. And more often than not, you end up making way too much.

Consequently, we often wound up with the only option of freezing the salad. But can you freeze homemade chicken salad? Is it even safe? 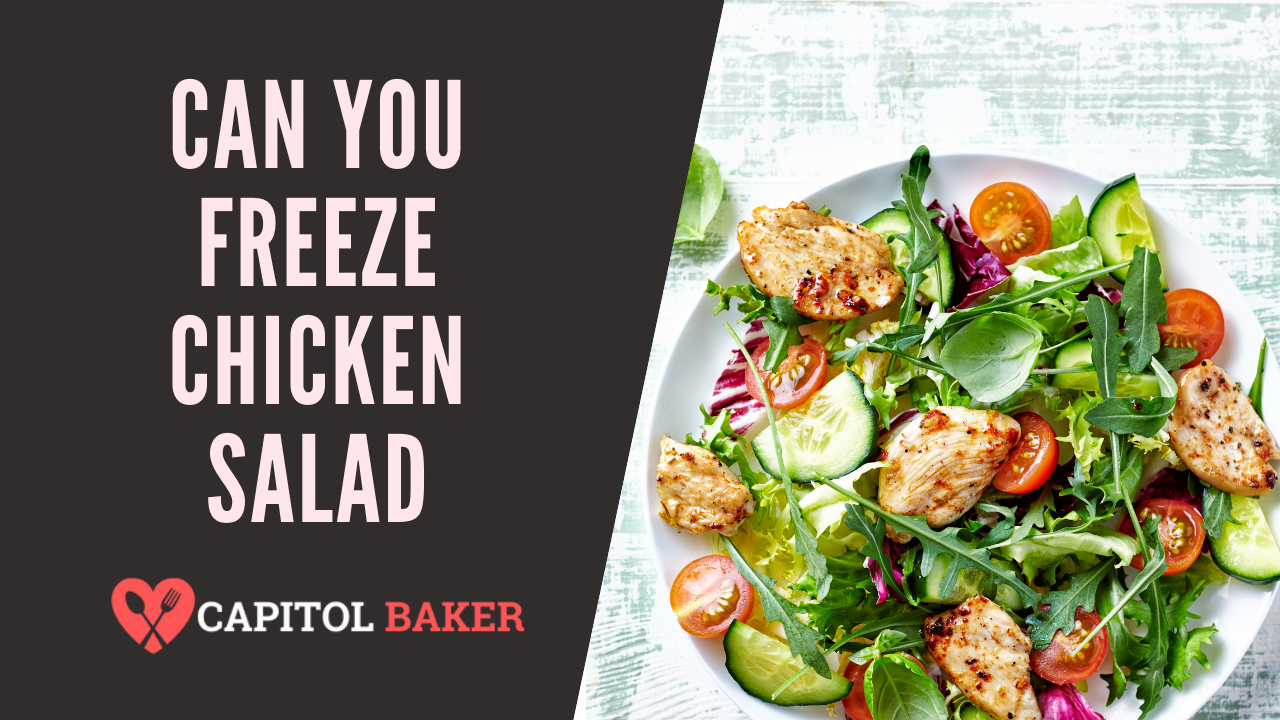 In a nutshell, you can freeze the salad. Though, the answer is not as straight-forward as that. There’s much to know about freezing a chicken salad.

Certain situations would allow the salad to be frozen, while in certain scenarios, it’s better you throw it out of your kitchen. In this section, we will discuss when the chicken salad can be frozen and when salads are better-left miles away from your freezer.

When NOT to freeze the chicken salad:

However, if you do some improvisation on the salad before placing it inside the freezer, some damage control could be done.

Although, you might have to subtract almost all the essential ingredients of the salad, including some vital veggies. That also answers if you can freeze homemade chicken salad, as most homemade salad consists of a profusion of celeries, cucumbers, and mayonnaise.

When to Freeze chicken salad:

If the chicken salad has not been affected by any of the things that we discussed above, it is fit to be frozen, but with keeping certain factors in mind.

But bear in mind, once you put a chicken salad in the fridge, it will lose its present taste, texture, and essence. It might become rigid or even soggy.

Once warmed up, you could taste the liquid in the entrails, which could put you off massively. This is why most people endeavor to make an adequate salad, lest the need for thawing arises. Don’t count on the same alluring taste to be retained even after thawing.

How much better a salad can hold up after thawing depends upon the ingredients that are used to make the salad. Some ingredients, rich in fat and water, tend to get separated, such as yogurt, mayonnaise, and other dairy-based products.

While, some ingredients, poor in fat and water content, can retain their quality to some extent, for instance, spices. Let’s take a closer look at the different ingredients of chicken salad and its nature after freezing and thawing.

Ingredients That Can Be Frozen (And Those That Cannot)

Being a dairy product and a commonly used ingredient in a salad, mayonnaise does not hold up well in the freezer. Once you thaw a frozen mayonnaise salad, you’d get the rigid texture and bad taste out of it.

However, if your salad included mayonnaise, you could pick this dairy product out before putting it in the freezer for some level of damage control. Of course, it won’t be the same as before, but at least the salad would be adequately edible.

Unwrapped bread would be affected under the chill of the fridge. Yet, it does well when frozen with the salad. If your chicken salad had bread as an ingredient, don’t shy away from freezing it for 2-4 days.

While some fruits and vegetables that have high water content are not the best things to be frozen, certain fruits will relish a time in the fridge.

For example, bananas and herbs can be frozen, while celery and lettuce cannot. You could always dress the salad again with condiments once you take the dish out the next day of the party.

Well, with garlic, it’s not whether or not it can be frozen, but it’s the taste that you need to concern yourself with—the taste of the garlic, much like every other ingredient, changes after freezing.

Since the taste that we’re speaking of is not bad per se, many people prefer freezing it as well. Hence, it depends upon whether or not you want to freeze the garlic.

There is no general rule of thumb surrounding this phenomenon, unlike in the case of lettuce and celery. It all boils down to your personal preference.

Can you freeze chicken salad with grapes? The right answer is no. Grapes are a high-water content fruit.

While freezing this salad is fine, thawing it can make the dish inedible, as far as flavor goes. Thus, chicken salad with grapes should be consumed immediately after preparation.

Ah, the star of the show. Would it even be chicken salad without the chicken? Of course, you can freeze the chicken without an inch of worry.

However, be mindful of the fact that once frozen, you will experience some change in the taste. That cannot be undone with condiments or any sort of dressing.

Though it won’t taste bad, and you will still relish every nibble of the chicken you consume, even if it has been thawed. Not only chicken but fish, bacon, and most other meat-based products do well in the fridge.

Is it Safe to Freeze Chicken Salad?

Freezing chicken salad is safe, health-wise, and taste-wise. However, under certain situations, you might want to consider the consequences of freezing and thawing, which some people would find unfavorable. And in some cases, you might want to skip the freezing altogether and immediately bin the salad. Following are the situations where you would want to chuck the chicken salad;

How to Freeze Chicken Salad?

Now that we’re done with the foreplay let’s dive into the real thing and freeze that damn chicken salad.

We don’t want to throw it out, and we’re too full to eat it, so perhaps, freezing it and nibbling it at a later time might be our only course of action. As long as you stick to the protocol of freezing this dish, you will be fine.

Transfer the contents of the airtight container to a freezer bag. Let all the oxygen once you’ve placed the salad inside by pressing both your hands around the container. Take as much oxygen out you can.

We don’t want to ingredients to go rancid quickly. Seal the freezer bag and don’t allow air in and out of the bag. You want to seal the deal as tighter as you can.

Place it in the freezer and ensure that there’s plenty of space around it for other stuff you might want to keep.

Don’t allow the chicken salad to sit in your freezer for more than a month. If you want to relish the salad in its full glory, Gulp it down within a week. This way, you will relish every bite of it. Taking too long to consume it will make it soggy, bad in flavor and texture.

See also  Can You Freeze Gnocchi? (Yes, Here's the Answer)

How to thaw Chicken Salad?

Chicken Salad needs to be thawed before you’re ready to use it. You will notice some change in texture and flavor, but that is an unwanted byproduct of freezing. There are two ways of defrosting the chicken salad.

Can you freeze chicken salad with miracle whip?

Can you freeze Costco chicken salad?

Store-bought chicken salad is a shaky surface to tread on. Most people suggest that when you open the store-rebought salad like Costco chicken salad, it needs to be finished up quickly. However, some people still choose to freeze it.

To answer this question, it can indeed be frozen. However, prepare for diminished quality of taste and texture; once opened and then frozen, some ingredients of the salad are bound to get separated, like dairy products. Thus, the overall flavor of the chicken salad would take a backflip.

Can you freeze curry chicken salad?

Yes, curry chicken salad can be frozen. However, the most you can freeze this chicken salad is for 3-5 days. Anything more than that will spoil the salad beyond repair. Consider excluding some ingredients like apples, grapes, and celeries to ensure that the salad holds up well in the freezer.

Can you freeze macaroni chicken salad?

While freezing macaroni chicken salad, consider separating the ingredients of the salad. Pack the freezable items of the salad in airtight sealable bags and place them in the freezer.

Chuck high water-content ingredients like mayo and yogurt and place only freezing-compatible items. Once you’re ready to finish the macaroni chicken salad again, dress it all over again. That should do the trick.

Chicken salad can be a tricky thing to deal with. 9 out of 10 times, you end up making too much. What to do with the leftover? The best of us refuse to bin it. And you can do precisely that as long as you keep certain factors in mind and freeze it properly. This article included everything you need to know about freezing chicken salad, from what you can freeze to what you cannot, and for how long you can keep it in the freezer.