Can You Freeze Flour Tortillas? A How-To Guide

Tortillas make an excellent wrap for delicious tacos and burritos. They can brighten up any dining table with their special appearance. However, more often than not, you wind up having more tortillas than you need. This could get you in a pickle because, obviously, you cannot keep it out in the open; you can’t throw it out either!

The good news is, you can freeze tortilla and preserve its essence for later consumption. Though, there are ample rules that circle the freezing of tortillas. It is not as simple as throwing the bunch in the freezer. You wish! Let’s get down to understanding the protocol of freezing those special tortillas! 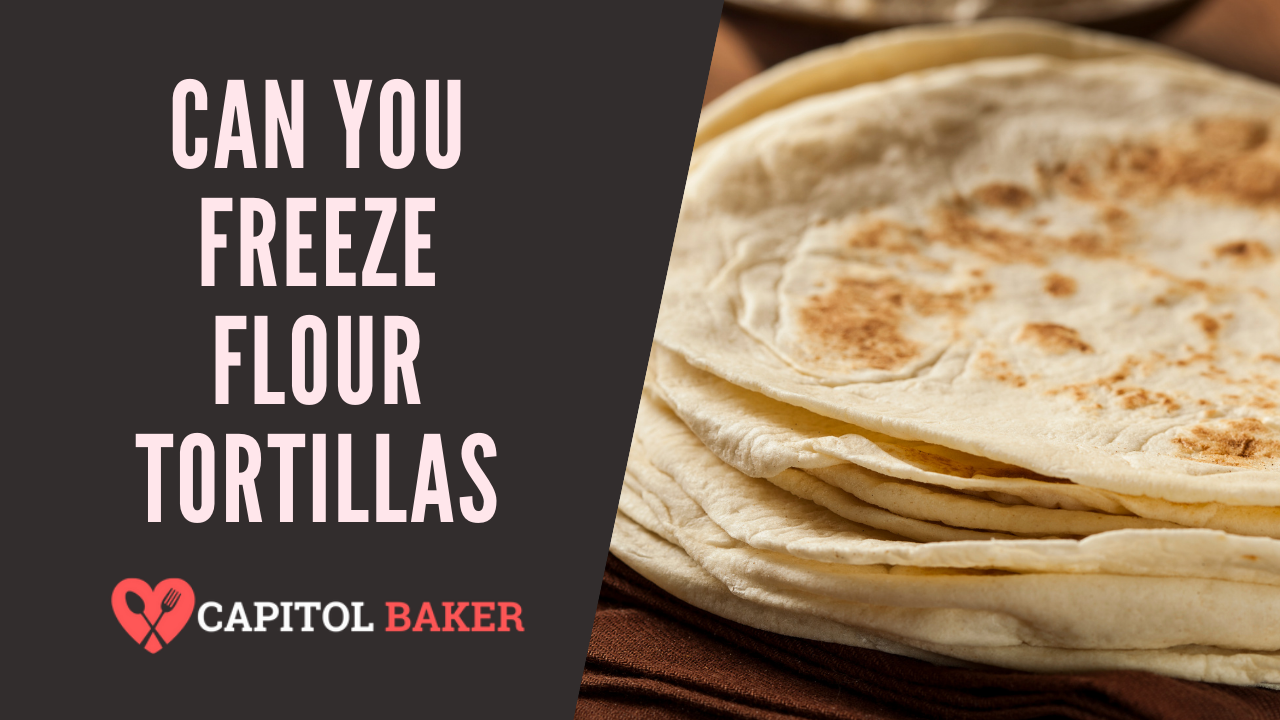 Can you freeze homemade flour tortillas?

The best of us relish tortillas, especially when they have been wrapped around something like nachos. And if it is homemade flour tortillas? Hallelujah!

But if you end up making more than you need, storing it could be a problem. Fret not; you could indeed freeze homemade flour tortillas! While the texture of the tortillas will slightly change, the taste of it would more or less remain the same. It all boils down to the technique you use to freeze the tortillas.

How to Freeze Tortillas?

Freezing a tortilla would require you to follow a certain procedure. This would ensure that you get the best quality experience of consuming it, even after it has been frozen and thawed. The general rule of thumb dictates an average tortilla to be frozen in the following way;

Step 1: If the tortillas have been bought from the store, you could enclose the tortillas in the same package in which it was brought. Ensure that once you place the eatable back inside its respective package, you seal the thing with utmost precision. The whole point of packing is not to allow the air to enter inside the package, while we want the existing air to be entirely pushed out. Squeeze package to get that extra bit of air out of the package. Subsequently, seal the deal with no space of air to enter.

Step 2: If the tortillas are homemade, you perhaps won’t have specialized packaging for them. Although, you could still wrap up the thing from your kitchen material. What you can do is, wrap the pieces of tortilla inside an aluminum foil or parchment paper. Each piece should have its personal foil or paper. Ensure that no air could go inside the enclosure while the air that was already inside is pushed out.

Step 3: Once you have wrapped each tortilla in its own package, bundle all the packages up and shove them inside a freezer bag. Place as many tortillas inside one freezer bag as possible. If there too many pieces, you could use two more freezer bags.

Step 4: Shove the freezer bags inside the freezer. Once you’ve placed the tortillas for freezing, ensure that you bring them out after 6-8 months. This is the limit to which the tortillas would be sufficiently able to serve you. Beyond that, the eatable is practically futile. Hence, use the tortillas within a month, or at worst, within eight months.

Additionally, ensure that once you fix a spot for the tortillas into your freezer, there would still be enough room left for any additions. You definitely would want to have adequate room for those ice trays, drinks, or any other stuff you generally keep inside your freezer. While in the case of most other eatables, freezing and thawing could snatch the flavors of the food, such is not the case with tortillas.

These beautiful round foods would taste good even if they have endured 3-4 months of freezing, that is, if they are frozen in the prescribed manner. However, the tortillas would lose their shape when frozen. This is especially apt if you have shoved too many tortillas packets into a single freezer bag. To avoid this, you could use several freezer bags to store your tortillas. However, prepare for some level of compromise. You simply cannot expect the tortilla to remain the same after they have been frozen for a long duration.

How to thaw tortillas?

Once the hibernation period of the tortillas has come to an end, and you’re all set to eat it, you might want to thaw it first. Thawing allows the food to loosen up and defrost. You wouldn’t want that ice crystal layer to spoil your experience, would you now? Thus, begin the process of thawing well before your supper.

You could either keep the tortillas in a relatively warmer space or place them in your fridge at an adjusted temperature. Begin thawing some 4-5 hours before you plan to consume it. Thin tortillas tend to thaw quicker than the think ones. But if it’s homemade, personal discretion would be required when it comes to ascertaining the time.

Can you freeze flour tortilla dough?

The homemade tortilla is the most cost-effective way of cooking. The flour dough for the same could easily be bought from the store and prepared at home. There’s no reason for you not to boast your handy skills at preparing a tortilla. But if you wind up preparing more dough than you needed, you mind find yourself in a difficult position. But there’s no reason to work yourself up. Flour tortilla dough can be frozen easily, and the essence of it would not be snatched away.

Most people, while making homemade tortillas, often shape them into tiny balls before giving them the round shape of a tortilla. The same balls could be conveniently stored in the freezer. Read on to know how you can store the dough balls effectively until you are ready to make the tortillas out of them.

See also  Can You Freeze Bok Choy? (Find Out Here)

Step 1: Form smalls balls out of your tortilla dough, just like you would make before making a tortilla out of it.

Step 3: Place the freezer bag inside your freezer, leaving plenty of space to store other essential items.

Voila! You can now allow the dough to be frozen for a few months and use rolled balls only when you need them. This would not only eliminate your storage problems but also prevent you from making the dough over and over again. Bulk making and long storing would work just as well.

Can you Freeze Flour Tortilla wraps?

Flour Tortillas are quite freezer-friendly when it comes to that. This is something that we have gone over a few times. But if the tortillas have already been used as a wrap, for tacos, or anything else delicious, then there might be some considerations.

While tortilla itself performs magnificently under the ice crystals, which could easily be thawed, as expounded in the previous sections, wraps are a bit tricky. Tacos especially can become soggy after freezing and thawing and lose not only the exquisite taste but also the inherent texture. Thus, while it is possible to freezer flour tortilla wrap, it is not something recommended, considering the consequences of doing the same.

Can you Freeze Mission Flour Tortillas?

Mission Flour tortillas are the best thing you could pick from their racks. It’s tasty, healthy, and, most importantly, storage-friendly. There are two ways in which you could store your mission flour tortillas; dry storage and refrigerated storage.

Mission flour tortillas can also be conveniently stored in refrigerators. While for homemade tortillas, special freezer bags were required, the same could be discarded if it is mission flour tortillas that we’re speaking of. You can store these tortillas in the same packaging that it was bought, just like in dry storage. The construction of the package will keep the tortilla separated and safe. It is also a cost-effective method of storing tortillas as you won’t have to invest in the freezer bags separately.

See also  Can You Freeze Gnocchi? (Yes, Here's the Answer)

Can you freeze soft flour Tortillas?

Keeping the tortillas soft can be tricky, as the freezing temperatures can take a toll on their texture immensely. However, it is still plausible if the prescribed methodology of freezing them is followed.

For this, you can get sealable plastic bags, freezer bags, or some airtight containers from the store. Place the tortillas inside any of the enclosures and ensure all the oxygen from the packages is removed. When you’re ready to use the tortillas, bring them out of the freezer and thaw them. Next, run them inside a microwave some 30 seconds before you want to use it. You’ll notice the tortillas soften up, much like it was before you put it into the freezer.

Can you freeze uncooked flour tortillas?

You can simply place the uncooked ones inside the freezer bags or the packaging in which you bought them. Much like the pre-cooked ones, you can keep them frozen for a few months and then thaw them 5-6 hours before cooking them. Don’t worry about it losing its taste or essence. While there might be a slight difference in texture, you wouldn’t notice anything off once you cook that thing and chow it down!

Can you freeze raw flour tortillas?

Yes. As long as you wrap it inside an air-sealed plastic or paper wrap, or even a foil, freezing it should not be a problem. You can then place all the wrapping inside freezer bags or airtight containers that do not allow the free flow of air. Before putting it inside, squeeze out all the oxygen inside. You’d be fine then! Although, you don’t want to keep raw flour tortillas lying in your freezer too long. It will begin to take a toll on its flavor, essence, and texture.

While freezing other eatables can be a messy task, tortillas are easy to freeze. There are not many things to be done before you put it inside the freezer. And whatever foreplay we have, all that can be done in just 20 minutes or so. Thus, the efforts are next to nil. You can now freely buy as many tortillas on sale as you want and not worry about the storage of the same. Just keep in mind the protocol circling the optimum freezing of the tortillas, and everything should pan out just fine.