By Nancy Melanson
Published on October 26, 2021

Cloves are the flower buds of the clove tree. The name clove is derived from the Latin word “Clavus,” which means nail. It looks like a nail, dark brown, and is extremely fragrant.

There are two kinds of cloves – Whole cloves and ground cloves. Though both are just cloves, each has different types of uses. The whole cloves are used to infuse flavor into the food. It Is usually removed from the food before serving. 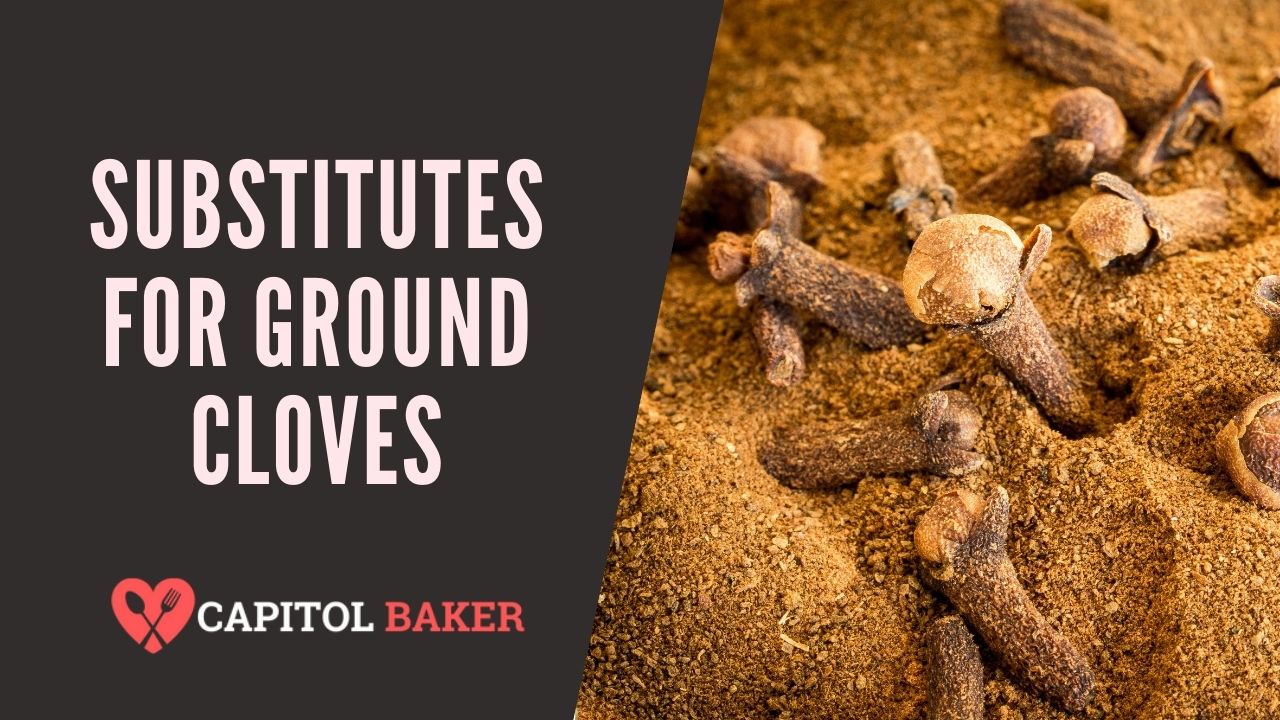 Ground Cloves are finely ground into fine powder. Ground cloves are usually used in combination with other spices. They are stirred well along with cake batter or pie filling. The ground cloves give a little flavor to your food. You would certainly not require a whole clove to be used for a cake or pie. You can use a ground clove instead. For one teaspoon of the whole clove, you can use ¾ teaspoon of ground cloves.

What if you don’t have both the whole and ground clove? No need to panic. Few substitutes can give you the same flavor. Let us look more into how ground clove tastes and what its substitutes are.

How does Ground Clove taste?

The Ground Clove has a pungent and peppery flavor to the food. In the grounded form, the fruit`s original taste is retained. However, the texture becomes thick and chewy to the ground.

It is not very spicy when compared with other spices. However, the pungent and aromatic flavor makes it the most preferred one for making pies, especially the pumpkin pies.

Ground cloves are themselves the substitute for Whole cloves. There are few substitutes to replace the ground cloves. Let’s look at each of them in detail.

The Cardamom seeds come from a plant from the ginger family. Cardamom is similar in taste to that of grounded cloves. Cardamom has the same intense flavor but does not give significant fragrance to the food.

Cardamom gives the food a spicy, smokey and juicy taste. There are three kinds of cardamom – Black, Green, and White. They differ in terms of spiciness.

If you begin to use cardamom in your food, you will realize that it is a gem of an ingredient to include in the food. Cardamom and cloves have a similar flavor, and hence it is considered one of the best substitutes for ground cloves.

The Allspice is a commonly used spice in the Caribbean, Middle East, and Latin America. It has a strong, pungent flavor very similar to that of Ground cloves. Allspice is best complemented with extremely spicy dishes.

The dried berries of the myrtle evergreen tree in Jamaica are extracted to get the allspice berries. Though the composition of Allspice is just one kind of berry, the name allspice is derived because of its mixture of spice aroma.

You can feel all of the spice in Allspice – chili`s herbal scent, peppery scent of cumin, and sweetness of clove and Cinnamon. So, if you are looking for any spicy ingredient, especially sweets, allspice mixture tops the list.

Cinnamon is a warm spice that gives an herbal and spicy taste to your food. It originated from the inner bark of the Cinnamomum trees. It is high in nutrition and is used by the royals to enhance their health.

The Cinnamon is extracted by peeling the cinnamon tree stem and extracting the woody parts from the branch. The woody parts are then dried and striped into pieces. That is the reason why the Cinnamon`s texture is thick, earthy, and herbal.

Remember that you can use cinnamon sticks that do not require the seasonings to be grounded or blended.

Though Cinnamon is not as spicy as grounded cloves, it has a strong herbal flavor. So, you have to use more Cinnamon to substitute the cloves. For instance – two cups of Cinnamon for every one cup of cloves.

If you cannot tolerate more spiciness in your food, you can use Cinnamon. The spice level is very mild in cardamom.

If you don’t have ground cloves, you can use the blend of all these together to substitute the cloves. The Pumpkin Pie spice is not just used for the pie; it can also be used for savories.

5. Blend of Nutmeg and Cinnamon

When you mix 50% of Nutmeg and 50% of Cinnamon into any dish, there is no way that people could feel that you have used a substitute. They taste almost the same as the grounded cloves.

Mace is a yellowish-brown spice that is made with Nutmeg. Harvest the Nutmeg and pick away all the seeds. Dry the Nutmeg in seeds in the oven and allow them to dehydrate fully. Coat them with the dried lacy, and mace is ready.

Since the origin is from the Nutmeg, it is partly sweet and partly spice. The perfect sweet and spice combination makes it the most desirable spice in all the food.

When the mace grows at its peak, it tastes quite a bit peppery and herbal. It gives the food a good aroma and the best taste.

Two types of mace are available in the market – ground, and whole. The whole mace gives a bit of sweetness. But, there is not much pungent flavor like the cloves do. So, the appropriate measurement for using the mace to cloves is 2:1, i.e., two cups of Nutmeg to one cup of ground cloves.

People often prefer the whole mace to ground mace. This is because the grounded mace may lose its signature taste.

By now, we would have understood the qualities of cloves and their substitutes. There might be some situations that might want you to use any of the substitutes.

The substitutes are not necessarily the exact replacement of cloves in terms of taste and flavor. Each of them has different flavors from herbal, sweet, spicy, and earthy. You can choose any of them based on your tastes and preferences.

We have discussed in detail the various substitutes for the ground cloves. Have you chosen yours? If not, read again and choose one soon. Do let us know how it worked out for you.